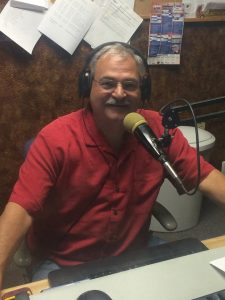 Mike Powers hails from the city of Paterson, New Jersey located just 12 miles from New York City. His childhood memories consists of all the fun at Palasades Amusement Park and getting influenced from listening to announcers Cousin Brucie and Dan Ingram from 77 WABC Radio!! As well as spending time at the Jersey Shore! After graduating from High School, Powers enlisted in the U.S. Navy,  a Vietnam Era Veteran. After his discharge he attended Temple University in Philadelphia, Pa. Mike has always had a passion for good ol’ rock and roll music and oldies!! He began his radio career in Philadelphia and has worked in several markets in Pennsylvania. He has held various positions from announcer, sales, Program Director, General manager and now ownership. He has been with WHGL-FM “Wiggle 100”, WTZN AM 1310, WTTC AM 1550, WTZN-FM “Oldies 99” since 1992. On the Oldies 99 he currently hosts the Morning show weekdays from 6 AM-10 AM, which he proudly names …the “Morning Zoo” consisting of contest, requests, interviews, and daily giveaways and prizes to his audience. He also hosts the late afternoon show on Wiggle 100 from 3pm – 7pm.

He is an avid New York Mets fan in baseball. In the NFL his loyalty belongs to the Washington Redskins, and he bleeds Blue and White for Penn State in college Football. Mike enjoys waking up early each morning to hit the “airwaves” as he says “if I can’t sleep in, ..neither can you!” He brings his style of entertainment and information to capture the radio audience that has somehow lost it’s stamina over the years, but listening to Mike Powers its truly the way Radio was meant to be!!