David “Rocky” Rockwell born and raised in Elmira NY although his father Elmer E. Rockwell Jr. was born and raised in Canton.  Rocky became facinated with radio at a very young age, listening to WENY, WELM, WEHH WKBW and WCFL.  After Hanging around the Elmira Stations for seveal years his first opportunity to go on the air occured because someone failed to show up for work in February 1972, Rocky has been on Radio ever since except for a brief stint at  WETM Television. Rocky worked at WQIX/WIQT in Horseheads until 1995 when he came to Wiggle 100. Rocky is a lifetime member of the South Creek Fire Department, Current President of the South Creek Lions Club a member of the Sons of The American Legion Post 49, a Member of the Troy Book Club, Member of the Alparon Park Board and a Troy Fair Board member.  Rocky and his wife Deb raised 2 boys and are proud to have 5 grandchildren (although Rocky thinks that is ENOUGH!!) in recent years Rocky has been turned on to “Cruising”and finds that to be agreat way to spend vacation time. Rocky says his only hobby is reading and loves spending time “spoiling the grandchildren” 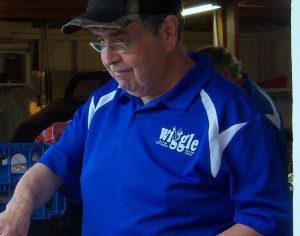 Back
Next
No events to display.